On 29 March 2017, the first steering committee of the "Education for All : Access to and Maintenance of the School for Burundian Children through Advocacy" (AMEP) took place after one year of deployment. This is an opportunity for us to present you with the main lines of the project.

A school system in restructuring

In 2010, with a view to achieving Sustainable Development Goal (SDGO) 4 ("Ensure equal access for all to quality education and promote lifelong learning opportunities"), a school reform developed primary education in Burundi by adding 3 years (from 6 to 9 years) to make it a basic education time. Improving the quality of education is therefore an important issue in the country.

Burundi is an extremely young country, with more than 50% of its population under 20 years of age, i. e. of school age. Since 2005, the fact that the school is free has led to an influx of children, especially in the first grades. However, maintaining the most vulnerable children (girls, children with disabilities, etc.) in the long term remains a major challenge. 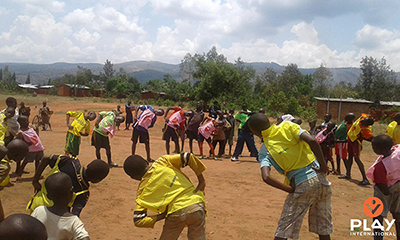 Secondly, the country faces many structural deficiencies: low school time, lack of teacher training, lack of school team structure and absenteeism. Finally, the political, security and economic contexts accentuate the precariousness of the situation. The country's instability causes many disruptions in the school system, such as school suspensions or population displacement (internally displaced persons, refugees, returnees, etc.) causing many school drop-outs and/or the influx of new students into already overcrowded classes.

It is in this sensitive context that the AMEP project aims to ensure that Burundian children have access to and stay in school. It will last 3 years (April 2016 - April 2019) and will be deployed in 15 municipalities in 7 provinces. The project is based on two main axes: the Playdagogy and the "Bridge".

Since 2012, PLAY International has been developing Playdagogy, an active and participatory pedagogy based on sports games that aims to raise children's awareness of societal issues in a fun and positive way. Through symbols integrated into the game, in connection with the theme addressed, the child expresses himself and takes pleasure while internalizing educational messages. An Advocacy session ends with a debate during which the child verbalizes his or her emotions and exchanges with others around the theme. Thanks to the playful and participatory aspect of the Playdagogy, the child's awareness of sensitive issues is facilitated.

First, PLAY International teams identified the elements that hinder children's schooling and can be addressed through awareness-raising actions. Three criteria of discrimination were identified as factors leading to school exclusion: poverty, gender and disability. Based on this observation, the "Social Inclusion" Playdogy Kit was created to raise children's awareness of the fight against discrimination, which is a barrier to schooling.

Building on the experience of the "Social Inclusion" kit, the "School Success" kit should enable preventive action to be taken with vulnerable children by raising their awareness of the importance of staying in school. It must also promote the reintegration of out-of-school children into school and their acceptance into the classroom by other students.

Finally, the "4th cycle" kit will be part of the school reform because it will cover the last three years of primary school and will therefore reach an older audience than the two previous kits.

the modeling of "Passerelle"

The "Passerelle" is a space for exchange and socialization between teachers (school environment) and the animators of Youth Centres (extracurricular environment) in which PLAY International operates.

It will take the form of the creation of 15 committees of practitioners (teachers and facilitators), the setting up of mixed pedagogical meetings and the relocation of activities (socio-sport activities in schools and school activities in Youth Centres). This rapprochement between different actors in education, both formal and informal, will enable teachers to identify out-of-school or out-of-school children present in Youth Centres. In this way, they will be able to take care of them by guiding them to school to ensure their long-term enrolment. Innovative, the "Bridge" is a pilot device from which PLAY International wishes to extract a model of intervention that can be duplicated and applied in other areas of intervention.

It is financed by the French Development Agency and the United Nations Children's Fund (UNICEF).